Wind power farms are being highly touted as a renewable energy source that is clean, safe, and a responsible way to generate electricity for our nation. However, nothing comes without sacrifice and these projects are no exception. The issue is being complicated, either intentionally or otherwise, by not openly addressing the very real fact that farmers with wind generators may lose the option of aerial application of farm protection products, seed, fertilizers, etc. on their farm ground. Possibly more significant is that their neighbor farmers, who have no wind generator(s) and consequently no income from them, stand to lose that option as well. 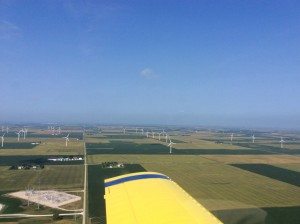 Some proponents of wind farms tend to dismiss this possibility out of hand, with the explanation that “those guys can fly around them with no problem,” or “just get a helicopter to do it.” Others say that ground application can still be effectively performed so the aerial option is insignificant. Unfortunately, it is just not that simple. Sometimes weather problems and/or timeliness of application dictate an application from the air.

The fact is, it is dangerous to fly within the confines of a wind generator farm. Without going into the technical aspects, windmills can cause vertigo sensations, create unstable wind conditions, and extend high enough to seriously affect the way an aircraft can work a field. That is why even a neighboring field without a wind generator may not be a candidate for aerial application: there’s no room to make a turn.

Proponents of wind farms point that the $4-5,000 paid each year to the landowner is a lot of money for a small piece of farm ground. Asian Rust has not been a factor thus far in Illinois, but the potential is huge. Match the $5,000 against a possible 80% yield loss of soybeans expected to average 60 bushels per acre. At $12/ bushel, that’s $576. If it’s an 80 acre field, that’s $46,080 lost. Cropping decisions will be tough in the future considering you can’t change your mind once the wind generator is up and operating. 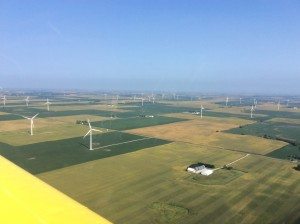 Will a farmer find an aerial applicator willing to book a field in the vicinity of a wind power generator? The answer is “maybe.” It will most definitely be at an increased application cost; possibly double. Helicopters are not the answer because there are only a few working the Midwest and they don’t like working in the wind farms either.

The Illinois Agricultural Aviation Association (IAAA) has been disappointed in the lack of candor by some wind generator proponents with regard to farmers’ potential loss of an aerial application option. We believe it is critical that a truthful picture be presented so that an informed decision can be reached. In June, 2005, the following Resolution was passed by the IAAA Board of Directors. It was re-endorsed on March 10, 2009.

WHEREAS, we acknowledge the need for affordable electric power and the efficient distribution of that power to the point of its consumption, and

WHEREAS, we acknowledge the environmental benefits of wind generated electrical power, and

WHEREAS, we understand the financial considerations involved when decisions are made to place wind turbines on otherwise productive farm ground, and

Approved by unanimous vote of the Board of Directors of the Illinois Agricultural Aviation Association.